The field we are hunting tomorrow was loaded yesterday with 30,000 snows and myself nor the clients got much sleep in the lodge. We were up at 2:30am. We couldn’t sleep much last night. It felt just like Christmas morning and the gift was a chance to crush the heck out of the snow geese and pile em up. We got to the field and pulled out to the exact spot they lifted off the evening before. An hour later the crew had 1,000 well placed decoys and we jumped in our white suits to just look like part of the flock of snow geese. We were ready to pile em up.
As the sun started coming up a lonely single snow flew over the rig not more than 20 yards high. I called the shot and the guns roared.

The snow crashed to the ground hard. I love hearing that THUD when they hit.
Getting back in position we could here the snows coming. Finally in the glow of sunrise we could see a cloud moving in the east. But the other clouds weren’t moving so what’s going on. That’s really strange. Then it hit me. It was about 5,000 snows hell bent for our field to feed. So any snows it looked like a huge cloud in the horizon.
They had been on the roost sleeping for about 14 hours and they were hungry.
Now the birds are about 1/2 mile out and closing fast. The excitement and anticipation is so great that you can feel your heart pounding in your chest. No wonder we love doing shooting snows so much. This experience is almost as exciting and thrilling as the hottest female on the planet begging for you to make love to her. Actually the older you get, the more thrilling hunting is. Oh well. 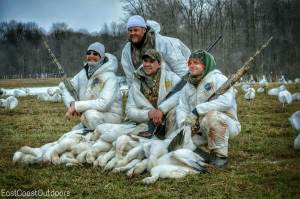 Now the birds, all 5,000, are only 200 yards out and locked up heading straight for our decoy rig. They sail in the last 200 yards at 25 yards high and it’s about to get ugly real soon. Because you can’t hear yourself think for all the noise that 50,000 geese are making honking, I have to scream the command to open up on these white bastards. “Kill em, Kill em Kill em” I scream as all 10 hunters pop up from their position on the ground. The guns roar as birds start to drop. Looks like It’s raining birds everywhere. Bang-Thud multiple times as the guns roar and birds hit the deck. Thud Thud Thud. After the smoke clears we start picking up birds. Some stone dead and some crippled but that’s where the retriever gets to have her fun. After the hunters and the dog get done retrieving the downed birds we do a head count. 16 dead birds. A great start for sure and some good shooting for sure. Hey guys I holler. Their coming at us again. Get in position. It’s about to get ugly again. And so goes the entire morning. Time and time again. An endless train of snow geese just not knowing when yo quit. What a hunt. After several boxes of shells and lots of banging we take inventory of the results of the hunt. 105 birds in three hours and done. We may have soar shoulders and a lot of birds to clean but we’ll be glad to do it all over again tomorrow. And rest assured. We will wake up early again just like the anxiousness of Christmas morning and be ready to get it and growl. Red on white. It’s quite a sight. It’s not the wild meat but the heart beat. That’s why we do it.
Join us and visit the snow goose hunting website and join hunting.